Cascadia Research will be undertaking a short (8 day) field project off the island of Kaua‘i starting July 26th, 2013. This will be our 9th field project (and 6th year) working off Kaua‘i and Ni‘ihau. The primary purpose of the project is to obtain information on movements and habitat use of a number of species of toothed whales through the deployment of satellite tags. We will also be obtaining photos from most species of odontocetes we encounter, to contribute to ongoing studies of residency patterns and social organization and to estimate population sizes. We will also be collecting biopsy samples for toxicology and genetic studies. In the last two years we’ve had similar field projects in July and early August of 2011 (download a report from that effort here), June and July of 2012, and February 2013 and like those projects we expect to have higher encounter rates than normal since we’ll be working in collaboration with the Marine Mammal Monitoring on Navy Ranges (M3R) program, using the Navy’s hydrophone range off Kaua‘i (see map below) to localize animals. When on the water we will be in constant contact with Navy researchers from the M3R program to help direct us to groups that they are detecting acoustically. This will allow us to confirm the species (to aid in using the acoustic range for research purposes on different species), and should make it much easier for us to find groups of whales and dolphins for tagging, photo-ID and biopsy sampling.

The research team includes Daniel Webster, Brenda Rone, Amy Van Cise, and Robin Baird, and a number of volunteers. This work is being funded by Commander, Pacific Fleet. 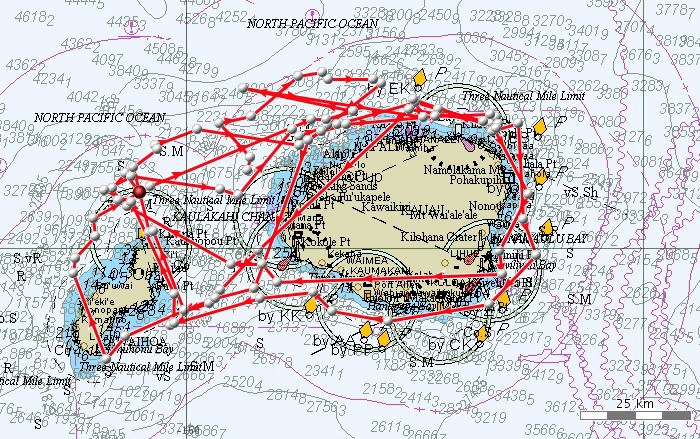 The map above shows movements for the last 9 days of the false killer whale we satellite tagged July 26th. 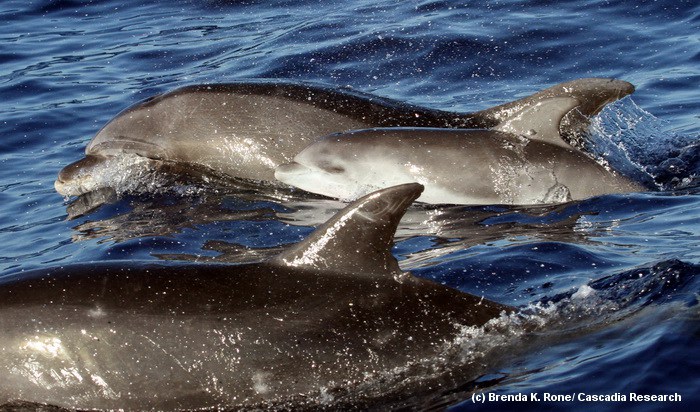 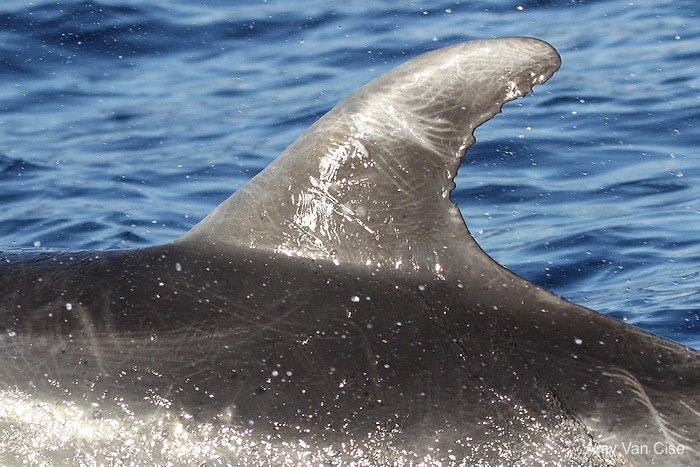 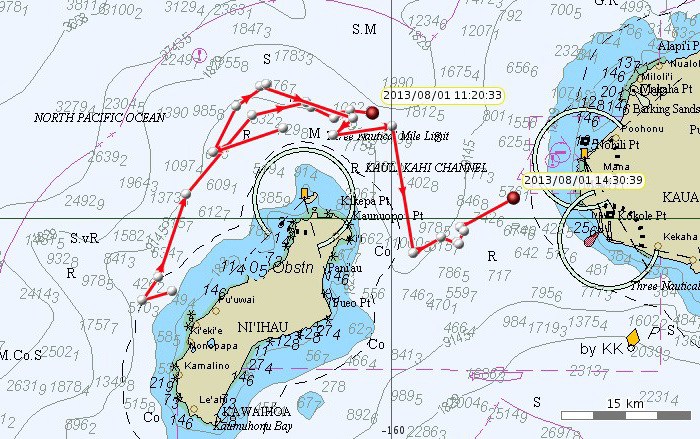 This map shows the movements of the two satellite-tagged rough-toothed dolphins over the last day. 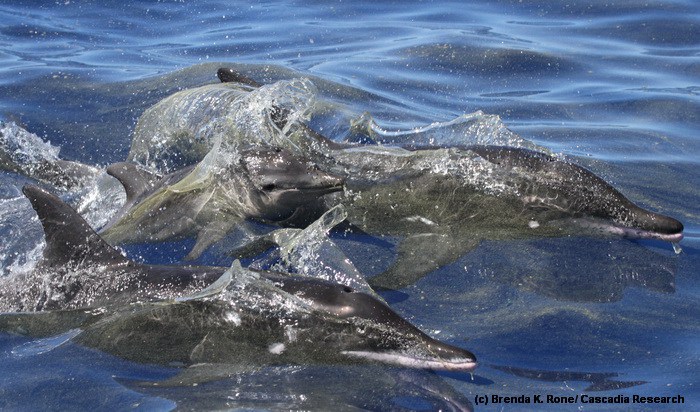 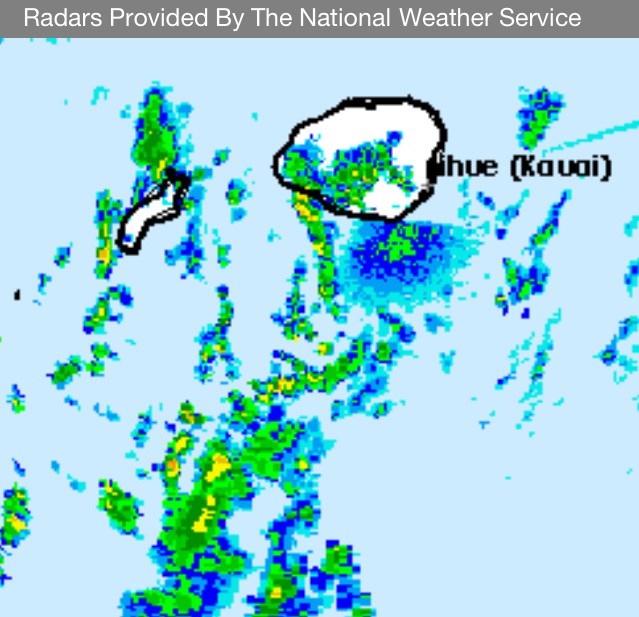 Today we are staying on land as the remnants of tropical storm Flossie move through the area, with heavy rainfall and strong winds. We are continuing to get movement information from both individuals satellite tagged so far this project. 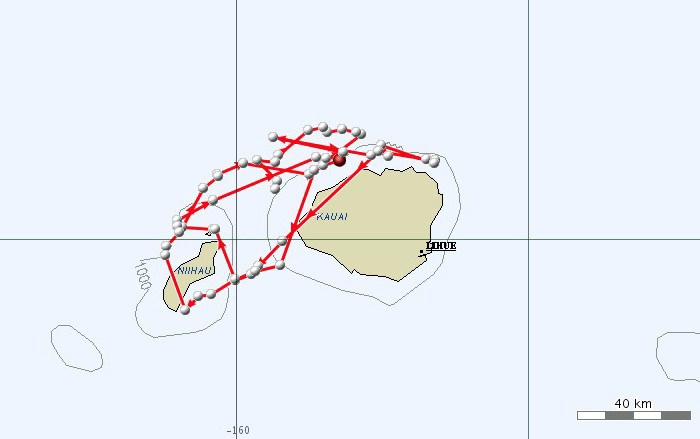 Movements of the satellite-tagged false killer whale since it was tagged on July 26th. 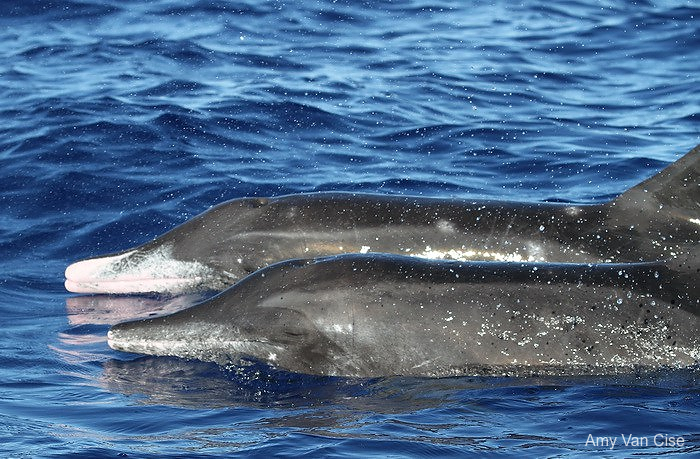 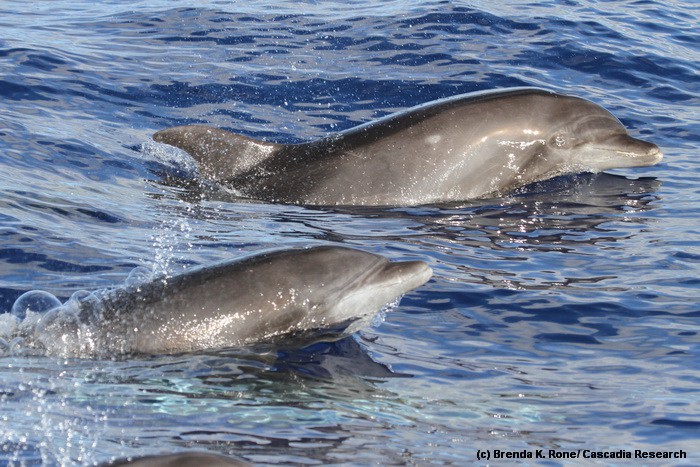 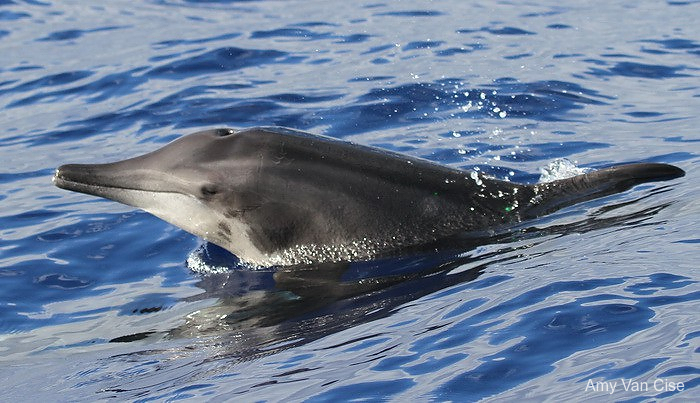 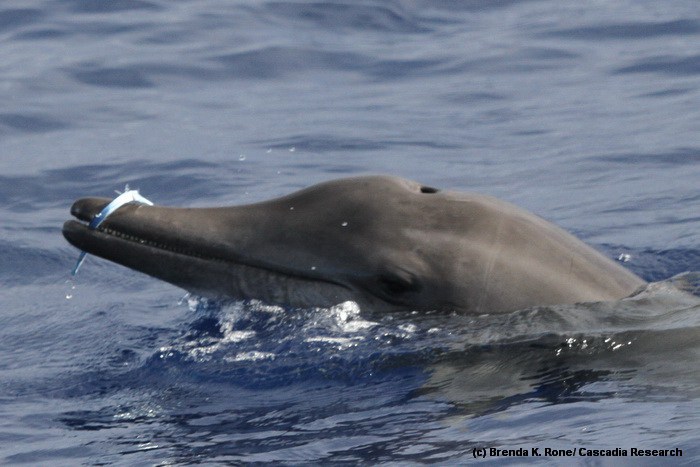 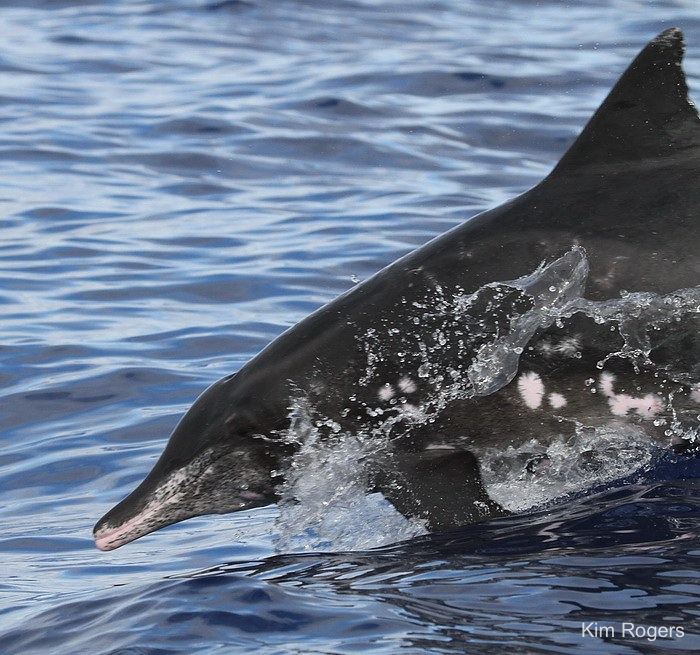 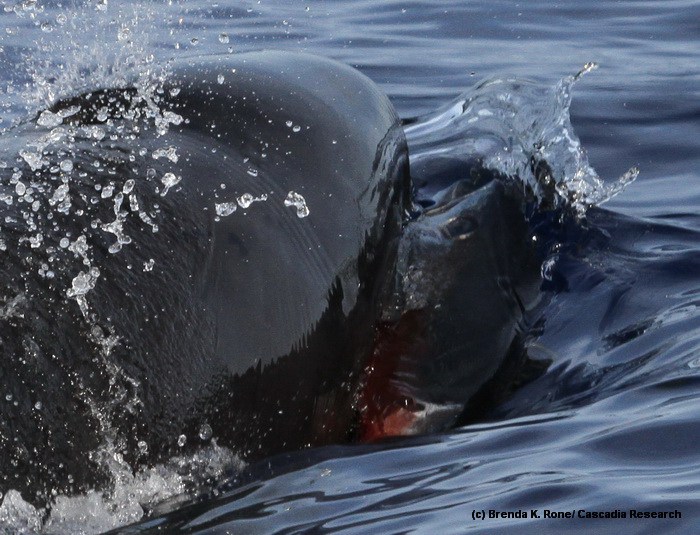 A false killer whale carrying the front part of a large tuna in it’s mouth, July 26, 2013. Photo by Brenda Rone.

A good start to our field project, with only our third encounter with false killer whales off the island of Kaua‘i in our 6 years of working here (our only previous encounters were in June 2012). This was our first encounter for the trip, a group of about a dozen false killer whales, spread out over several kilometers. We were able to deploy one satellite tag (one of the depth-transmitting tags), collect one biopsy sample for genetic studies, and photo-identify about 7 or 8 individuals. 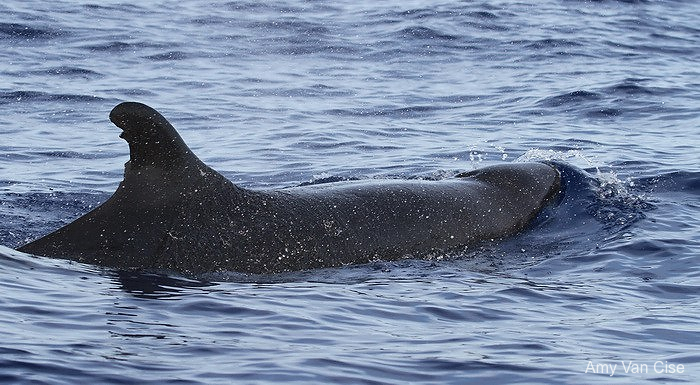 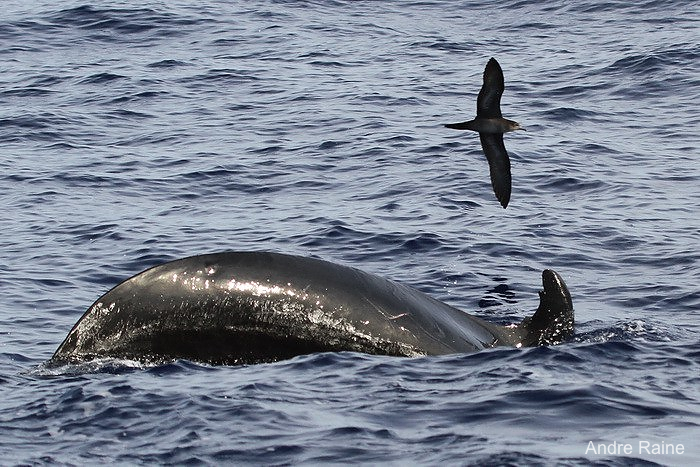 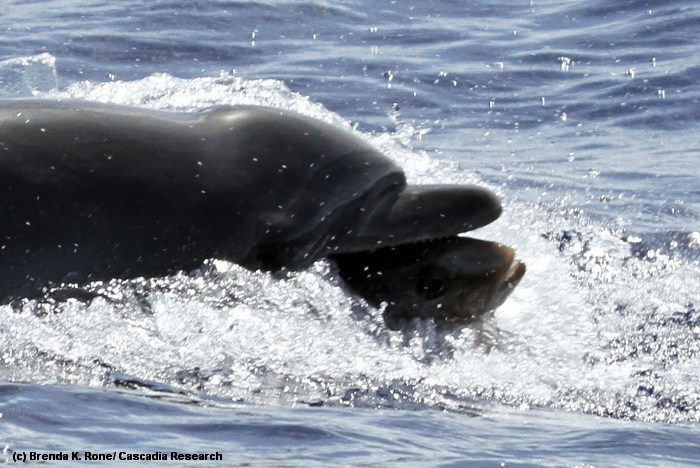 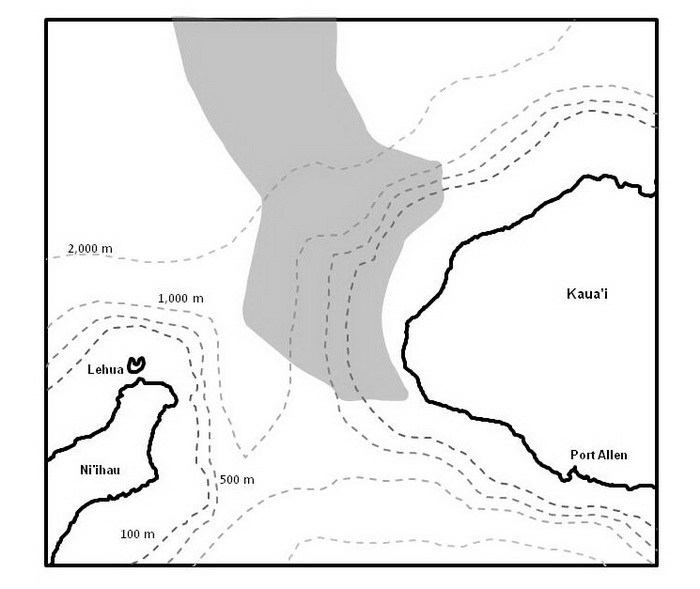 Our study area for the project. The Navy’s hydrophone range it shaded – 183 hydrophones are spread across the shaded area connected to the M3R system.