From August 9 – 28, 2007 we are undertaking research off the island of Hawai‘i (the “Big Island”) in collaboration with the Wild Whale Research Foundation, and funded by the Southwest Fisheries Science Center of NOAA Fisheries (supported by the U.S. Navy N45), Scripps Institution of Oceanography, the Northwest Fisheries Science Center, and Dolphin Quest. The research team includes Greg Schorr and Robin Baird of Cascadia, Daniel Webster, Dan McSweeney and Allan Ligon of the Wild Whale Research Foundation, Erin Oleson of Scripps, Megan Ferguson of NOAA SWFSC, and a number of volunteers. Our primary goal is to obtain additional information on diving behavior of Cuvier’s and Blainville’s beaked whales, through the deployment of suction-cup attached time-depth recorders. We have a number of additional goals, including:

This will be our first ever survey in Hawaiian waters in August, and will now allow us to state we’ve surveyed 12 months of the year. Waters are particularly warm (~27 degrees Celcius) at this of the year, and tuna should be common (hopefully attracting false killer whales to our study area). 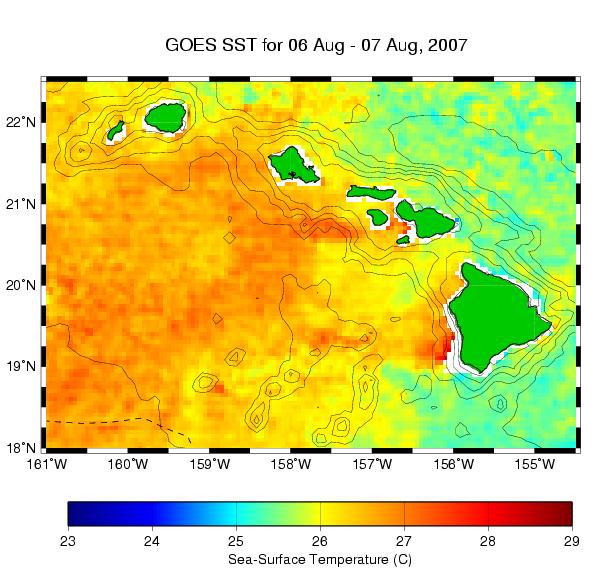 The most recent updates are at the bottom of the page. 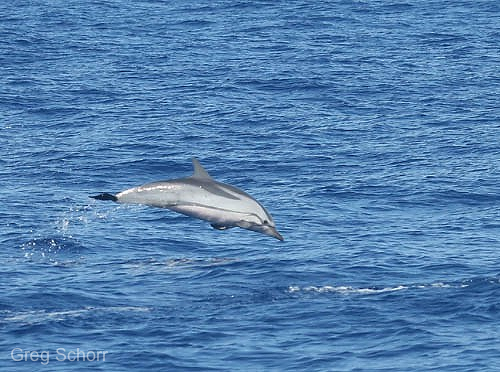 Day 2 of our trip, we’ve covered 278 km of trackline, most of it in reasonably good sea conditions (Beaufort 3 or less). Our first sighting of the trip was a group of striped dolphins, quite surprising as this species is only infrequently seen off the big island (only 9 sightings out of 581 odontocete sightings from our previous surveys). We usually see striped dolphins in very deep water (>3000 m) – this was one of our shallower sightings of this species in only ~2500 m of water. Unfortunately striped dolphins in Hawaiian waters (and most other areas in the Pacific) tend to be vary wary of boats, so our view was a brief one as the dolphins moved away. 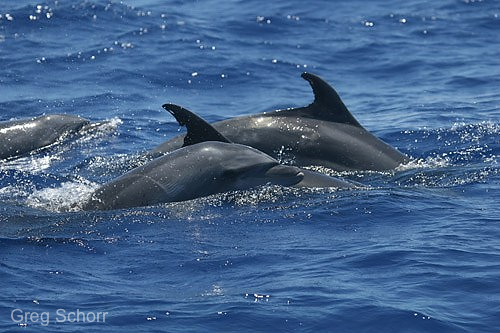 We also had a large group of bottlenose dolphins (~28 individuals) and we were able to photo-identify most individuals (a lot of very well-marked individuals) as well as collect 4 biopsy samples for genetic and stable isotope studies. We collected our first squid of the trip, a small one (possibly Histioteuthis) floating at the surface being scavenged by a Bulwer’s petrel (we use the bird’s feeding behavior as a cue to look for dead squid).

We had three cetacean sightings on August 10 (more bottlenose dolphins and two groups of pantropical spotted dolphins), and were also able to deploy the HARP (High-frequency Acoustic Recording Package) in about 650 m of water, south of Honokohau Harbor. This recording package will sit on the bottom, with the hydrophone suspended by a float about 25 m above the bottom, recording continuously for the next 60 days or so. The HARP has an acoustic release mechanism, and will be recovered (we hope) in October by NOAA Fisheries Pacific Islands Fisheries Science Center. Over the next 17 days we will survey in the area of the HARP regularly to be able to compare acoustic to visual detections. 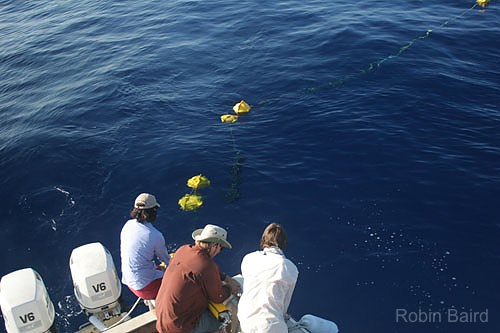 Deployment of the HARP off Kona, August 10. Photo by Robin Baird

On both days we’ve also come across extensive slicks of what appears to be decomposing phytoplankton or perhaps coral spawn, extending for many miles along current lines. We’ve collected a sample of this material and hope to have it identified. 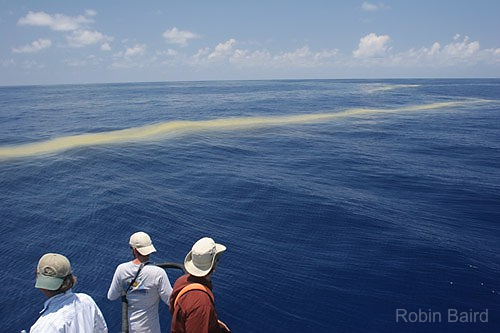 While there have been few sightings in the last two days (only 4 in 279 km of trackline), it has been quite productive nonetheless. We encountered a large group of rough-toothed dolphins (~45 individuals), and were able to obtain dorsal fin photographs of 25 or more individuals to add to our photo-identification catalog of this species. On average rough-toothed dolphins are the 6th-most common species of odontocete we encounter off the Big Island, and we have a catalog of 337 distinctive individuals from around the main Hawaiian Islands. These photos will be compared to the 124 distinctive individuals previously documented off the Big Island as well as others off of Kaua‘i and O‘ahu to assess site fidelity and movements among the islands. 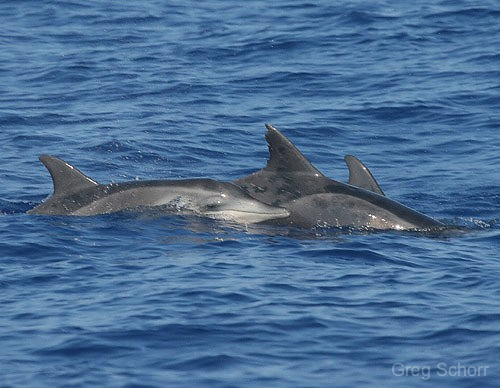 We also had our first encounter with short-finned pilot whales of the trip – a group of ~25 individuals including three adult males. We were able to deploy two satellite-tags (using Wildlife Computers Spot-5 transmitters) and one VHF-radio tag (a Sirtrack transmitter) on individuals in this group (two on adult males and one on a sub-adult). These are “medium-term” tags, expected to stay on and transmit for 1-2 months. We will hopefully receive locations of the whales once or more per day via signals transmitted to orbiting ARGOS satellites, allowing us to examine movements of pilot whales among the islands, as well as examining their offshore range and movements around the islands (to the windward sides, where we are unable to survey). 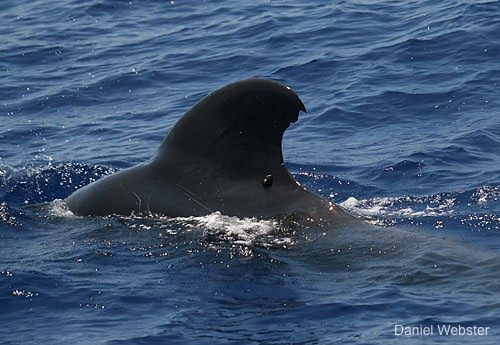 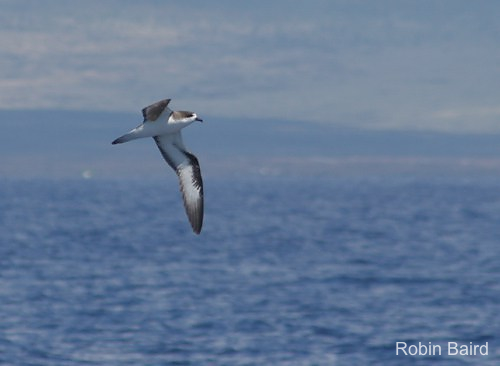 Hawaiian petrel off Kona August 11, Photo by Robin Baird. Thanks to Peter Pyle for confirming the identification of this sighting. 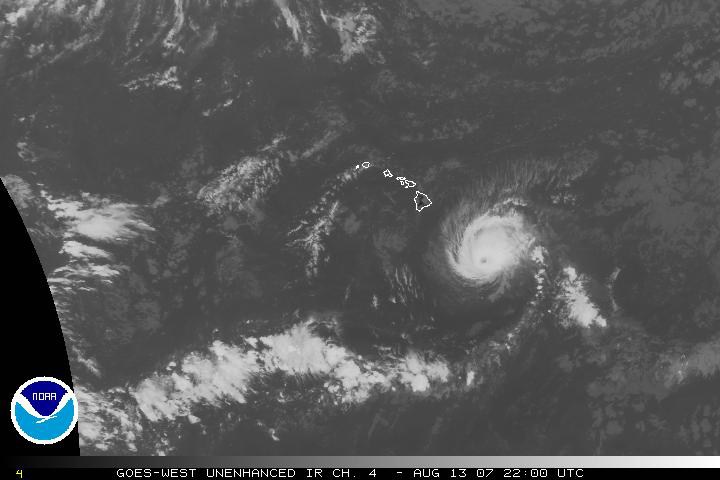 We are staying on land today.

A good day yesterday – we encountered a group of pygmy killer whales, a species we see relatively infrequently, despite the fact that photo-identification data indicate this species show high fidelity to the area. Photographs from this group were matched to our catalog today by Sabre Mahaffy – this was a group we’ve seen previously off the island of Hawai‘i (HIFa006, HIFa008, HIFa009, HIFa278, and probably HIFa279). Little is known about this species’ behavior or ecology – yesterday we attempted to deploy a suction-cup attached time-depth recorder to examine diving behavior (nothing is known of the diving behavior of this species). One tag was deployed, but stayed on for less than two minutes, and the individual dove only to 18 m. Probably a good thing that the tag came off so quickly, given the approach of Hurrican Flossie (which could have *complicated* the recovery of a tag that stayed on an extended period). 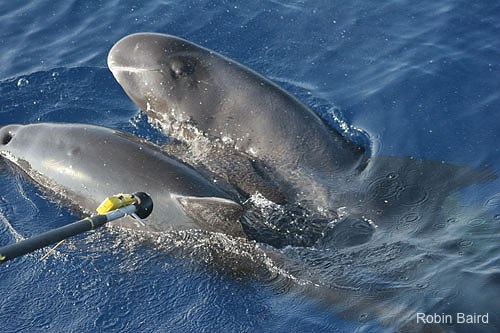 Later in the day we encountered a dispersed group of ~25 short-finned pilot whales, and were able to deploy another medium-term satellite tag, as well as a medium-term VHF tag (which should allow us to re-locate the group if they are within our study area). We are continuing to receive satellite locations from the first two tags deployed a few days ago – both whales have moved up to the north end of the island. During the pilot whale sighting we also observed a breeding plumage Franklin’s gull, a relatively rare species for this time of the year (gulls are quite uncommon in Hawai‘i, with no breeding species). We are looking forward to getting back out onto the water after the hurricane passes! 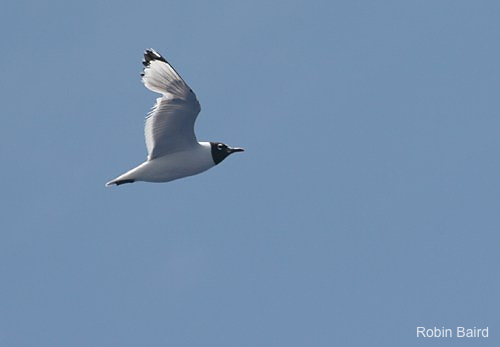 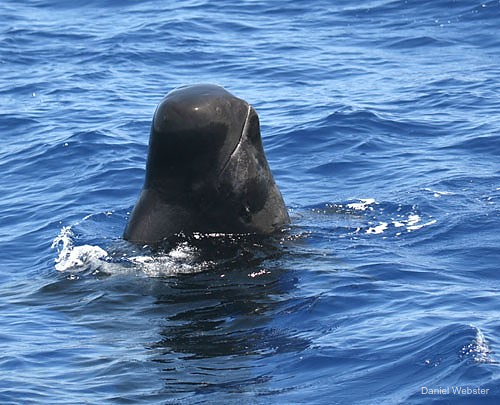 Back on the water after “hurricane” Flossie passed by the island – mostly a non-event for us. Other than a larger swell than normal, we experienced little of the hurricane on the west side of the island.

Yesterday we had our first beaked whale sighting for the trip, a lone Blainville’s beaked whale. First spotted at a distance of about 550 m, by the time we approached the whale had dove, although we were able to see it sub-surface for several minutes before it finally went deep. We typically will wait for up to 90 minutes after a beaked whale sighting to try to re-sight the group (the longest dive we’ve recorded from an individual instrumented with a time-depth recorder is 90 minutes). After waiting an hour the whale was re-sighted ~1.4 km away, and by the time we approached it had dove again. Splashes seen half an hour later in the distance turned out to be a pair of striped dolphins (an unusual sighting – striped dolphins are typically seen in much larger groups, and in Hawai‘i at least, in deeper water). 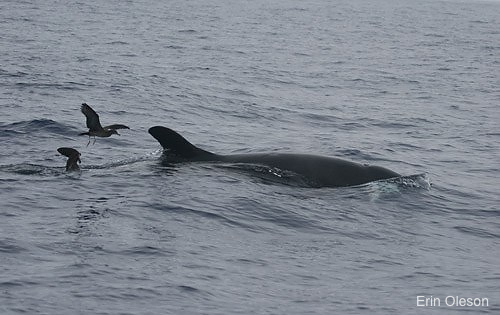 Just as we were heading back into the harbor in the afternoon we received a call of false killer whales south-bound off the Kailua-Kona airport. Heading back out we were able to locate the group, photo-identify 7 or 8 individuals, deploy three satellite tags, and collect two biopsy samples (for genetics studies). A good day on the water. 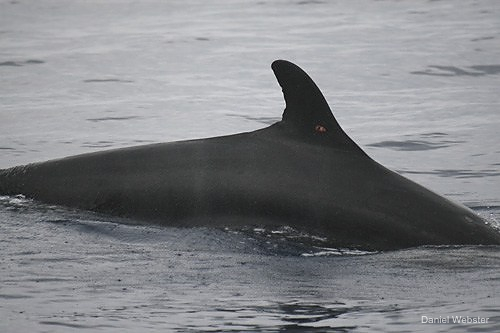 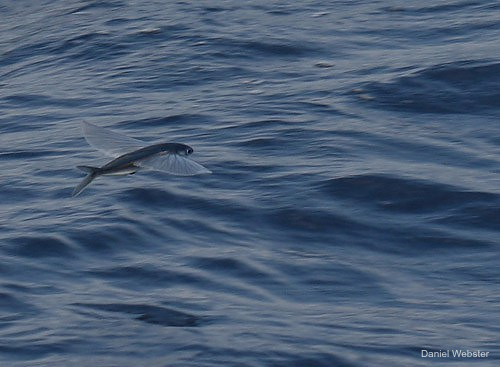 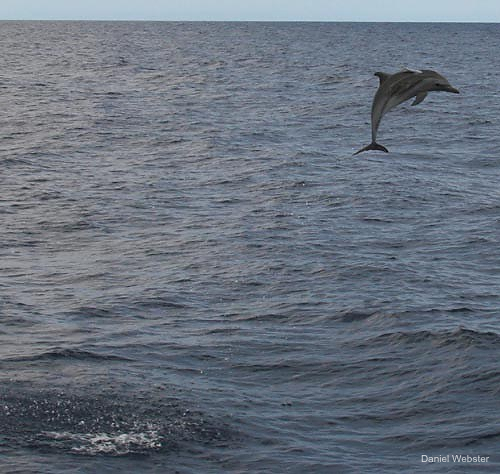 Since our March/April 2006 trip to the big island we have been collecting dead floating squid and octopus, both for trophic ecology studies (a collaborative project with Jason Turner at UH Hilo analyzing stable isotopes), and to assess what species of squid are in the area and potentially available as prey of beaked whales, pilot whales, and other squid-eating odontocetes. Our primary cue for spotting these squid are scavenging seabirds. 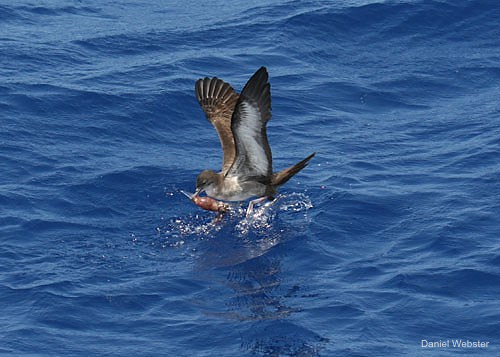 So far this trip we’ve collected four individual squid, three over a two-day period. The last collected is certainly the largest cephalopod we’ve collected (out of ~14), weighing at least 30 lbs and with the two longest arms approximately 7′! All are now frozen and waiting to be shipped to Bill Walker at the National Marine Mammal Laboratory in Seattle for identification. 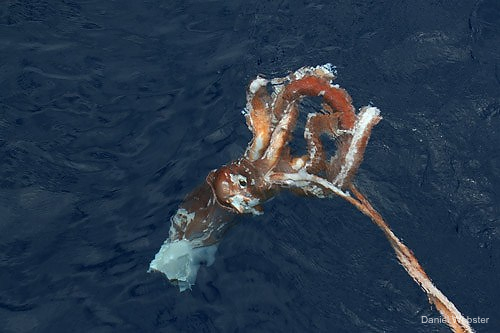 Map showing locations of a tagged false killer whale from August 15 through August 19, 2007.

The highlight of the last few days was our first-ever sighting of Longman’s beaked whale in Hawaii. A group of ~30-35 individuals was first seen (and photographed) by Dan McSweeney – we were able to get out to the group and get a look before they dove. Despite searching in the area for two hours afterwards we were unable to re-locate the group. To our knowledge this is the first confirmed sighting of this species off the main Hawaiian Islands and only the second confirmed sighting of this species in Hawaiian waters. 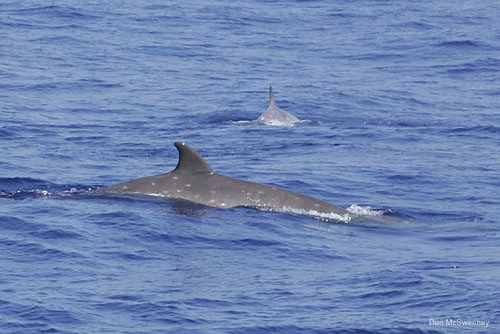 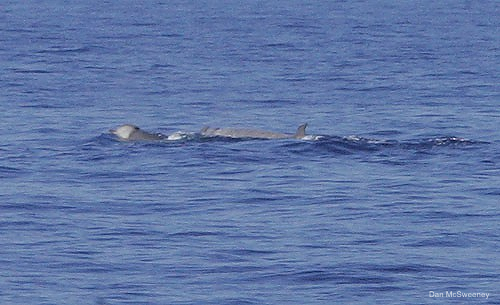 End of the trip update

Today was our last day on the water for this trip. Over the last 19 days we’ve spent 130.5 hours on effort, covering 2,275 km of trackline off the Kona coast of the big island. During this time we’ve had 50 sightings of 12 species of odontocetes, taken approximately 13,000 photographs (for either individual or species identification), collected 16 genetic samples of five species (14 from biopsies, 2 sloughed skin samples from suction-cup attached tags), and have collected five squid (including one Architeuthis, see photo above). After 12 days we are still receiving daily locations from two of the three satellite tagged false killer whales, tracking their movements as the move among the Hawaiian Islands. We’ll add a few more highlight photos from the trip over the next week.

All photographs on this page are taken under NMFS Scientific Research Permits and are copyrighted and not to be used without permission.